My quest is learning patience. I think. I had plans for 2013 and that was my first mistake. Somewhere mid-summer, all hell broke loose and I'm heading back to New York for the third time this year to visit the folks and see how things are going. As a result, the usual PotteryPalooza held at the Irvinton House Museum is postponed until 2014. I'll be doing a sale with my buddies, Bruce and Kelley Hoefer of Turning Wheel Pottery in Berea, KY as a guest artist once again. Check back for details as Kelly and Bruce are getting the announcement info together.
More items like the one below are up on Etsy until then. I am enjoying the new aesthetic of intersecting geometry and touch points. It's more intensive in the surface treatment and glazing as I stamp, carve and underglaze once before bisque firing and underglaze once after bisque firing with a clear liner glaze over top of everything. I'm still tweaking the glaze recipe but I may be on to something there, too. Everything takes small tiny steps. I'm just impatient for things to be resolved. I blame my hormones.
Speaking of situations resolving, that's the one I wish for the most. Let's get out of the "peri" phase and get right to full-blown menopause. I have a friend who swears when you're about done with your period, you come to a time when you wish you could get it again. Um, no. Maybe for her, never for me. Ready when you are, Mother Nature! 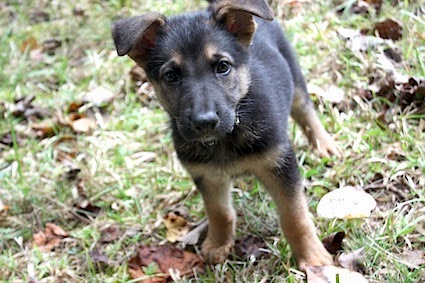 We have a new puppy. It is all kinds of cuteness. Sometimes I want to squeeze it so much because it's so cute that I'm afraid poop will come out the back. I think Maxx would have approved. Still miss my big bear. We'll see how large this boy gets. His paws have become frighteningly large in the last week and a half. Housebreaking continues. Most of the time he gets it but sometimes I can't get him outside early enough. He's only 9 weeks old. Soon enough he will be an outside dog and it won't matter anyway. 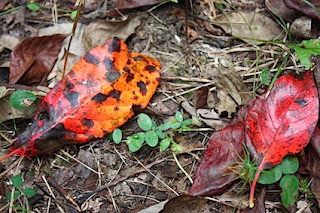 And there is where things sit. Fall has arrived finally but the leaves have not turned very colorful this year, more like brown and dead and on the ground. We had a long spell of dryness in September and it was so hot even just last week. I think we hit 87°F one day. That's just all kinds of wrong in late September/early October. The great thing this year is that our apple trees have yielded the largest, juiciest, sweetest apples that I can remember in my 14 years that I've been on Sand Hill. Yummy!
Back to another load for the kiln. I am working on plans this year and beginning next year to draw up designs and plans for a soda kiln that I want to build on our property. Lots of things on the list to check off but you have to start somewhere. For now, the electric kilns will help me put out some pots for the holidays. Cheers, y'all!