What better time to start a wood-firing than when there's inclement weather on the horizon, I ask you? Best to my peeps back on the East Coast. Best to the pots in the kiln!
at 2:07 AM No comments:

We cannot see time so we make a line for it to mark it off as it happens. Time is change. We look behind us to recognize time, measuring against our origins. 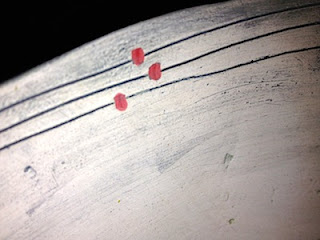 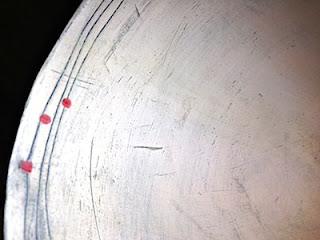 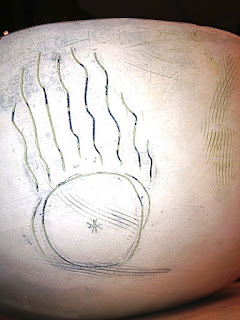 I don't like watching debates of presidential and vice presidential candidates. They are meant to play like some kind of reality show and turn elections into gladiator-type events. They cheapen things. Reality shows are anything but real. I don't know what I find more disheartening, that people watch these shows or that they don't understand that they are still scripted like a sit-com but without union writers and actors and scale pay. I digress. Political media people, the bastard step-children of media, don't pull in high ratings so political events end up mimicking high-rating tv shows like reality shows. It's not for information, it's purely for ratings. Everything is scripted including the headlines and run-up to the Big Show. It's sad. I wish we could get the big money out of elections, get the free-for-all advertising out of elections, make them 6-8 weeks long, tops. Level the playing field and no more of these MMA/UFC-type "debates." 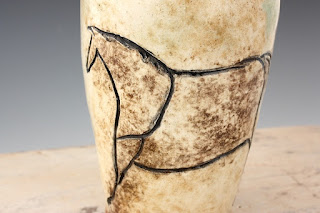 In lieu of this interruption of my time, I have work in the studio, several books and alternate television to keep myself from going nuts. If I'm going to watch a reality show, I'll watch a genuine one. In fact, I have actually enjoyed "Project Runway" in the last few weeks. I've also taken to reading real paper books. My selection in the last week has been between Jane Austen's "Emma," apparently the only Jane Austen book the Estill County library possesses, and "Ambiguous Images: Gender and Rock Art" by Kelly Hays-Gilpin, a book that re-examines identifying gender in pre-historic rock art world-wide, and our beliefs about who made rock art and why. Since the things that inform my work are based in gender identity, origins, connection to the natural world around us, I find examinations about this subject fascinating. It has always piqued my interest as to why we assume all full-figured female figures in the prehistoric record must relate to fertility. Or why, even, do we assume that any gender depiction of women must relate to fertility? It could be posited that much interpretation of rock art stems from the ethnocentric point of view of the interpreter including the gender of the researcher. A prominent question about rock art is the assumption by many, historically and perhaps, presently, that the makers of rock art were male. Why assume that? Highlighting that bias, Hays-Gilpin relates a summary of a conversation with a male student on the subject that 'in the Western tradition, men and a few iconoclastic (and mostly upper-class) women "do" art while most women and working class men do "crafts".' She continues: " One of the most unproductive arguments I ever had with a student was about this art-craft dichotomy. He insisted that pottery and textiles were crafts and that painting was art, and nevermind paintings on pottery. Because they appear on pottery, they are clearly craft, he said." She argued that "we cannot know what kind of values other cultures, especially past ones, placed on decorated objects; the decoration on the objects; and the decoration of rock, plaster, clay or canvas surfaces. Are we really using some inherent aesthetic qualities to assign images to "art" versus  "craft," or are we using the socioeconomic class and gender of the makers to classify their products as art/superior verus craft/inferior?"
This paragraph made me think about how often this point comes up even now in modern art/craft times and how does it relate to me, practicing art as a woman in a medium classified as a "craft?" So I stopped reading to give my mind a break, wandering out on the internet for some entertainment. Trending on Twitter at the time was this:

It's moments like these that confirm for me that I am right to not watch the debates in real time. Watching on Twitter, after the fact, is far more interesting, funny, thought provoking, &c. Just what the does this mean? Who said it? Why did they say it? What on earth would precipitate a phrase fragment such as "binders full of women" to trend on Twitter? In what context? And then reading the transcript this morning to find out how this phrase came about sends me back to that gender bias question from Hays-Gilpin. Why do we assume that things of importance, jobs of importance, art of significance, can only be done by men? That we must research and collect "binders full of women" for cabinet positions because, gosh darn it, there are just no qualified women out there! That "objects" equals "crafts" but "crafts" do not equal "art" which translates into "inferior to art" for some unknown reason. When I draw on a piece of paper I elevate my thought but when I draw into wet earth to be fired into a permanent object, I'm cheapening it? How does that cognitive dissonance work exactly? Because I am female? If a man does the same thing, is it less of a "craft?" 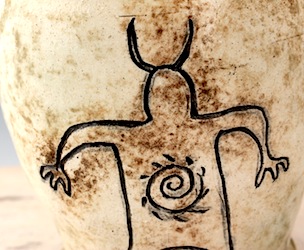 The bottom line as far as I'm concerned is that unless we can extract some DNA from the rock art itself and definitively connect it to the maker of the art, we do not know who made the art. We cannot assume. Well, we can, but should we? Here's another thing to consider: when I make my art, I have an artist statement that can accompany it. I have my daily/weekly/monthly process that a person can follow along with, on my blog. I can tell you what this particular piece means from my point of view as I made it. However, I also know that if you do not have all of this information, you can still relate to my work artistically, without knowing my gender, my background, my thought process. So when I look at rock art, is it fertility that it speaks of when the images presented are gender identified? Shamanistic? Or did humans then, have moments like I do now, where they just did it because they could, to get better at it, to practice, to explore a thought?
Our own biases are sometimes invisible to us. 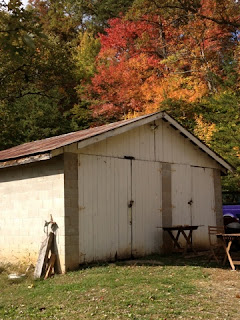 Bought a bead rack. I'm experimenting with some pendant ideas and working out the kinks. Tomorrow, I'll do another glaze firing, a bit of a re-fire to test the "one cone higher" idea for my kiln-sitter just to see if I reach closer to temp. Cross my fingers I don't open the kiln to puddles. Well, at least I know the clay is high-fire.
On Monday, I was fortunate enough to attend a lecture at EKU given by David Katz and Jason Bige Burnett about residency programs. Both of them are doing residencies at Arrowmont, a wonderful place. I was fortunate enough to get a a scholarship to attend a one-week workshop with Nick Joerling when I was an undergrad at EKU.
David Katz does some wonderful unfired ceramic installations that are just wild; they fully inhabit the room and you have to walk into them and interact with the space. Jason Bige Burnett was also kind enough to demonstrate his screen-printing technique of colored slips on leather-hard clay surfaces. Both of them have diverse and interesting backgrounds and do amazing work.
Next up for me, though, will likely be getting ready for a wood firing at the end of the month. For now, fire that kiln!