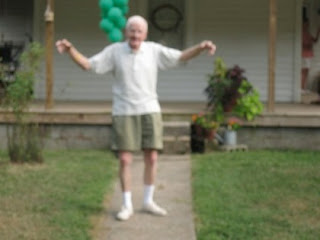 A bit discombobulated here. My 88-year-old dad fell and broke his hip at the end of the week back in the Homeland of the NY metro area. He's fine and has joined the legions of elderly who have hip replacements. His is just a partial but nevertheless, many phone calls around the United States, relaying info all weekend. Happy Healing, Dad! 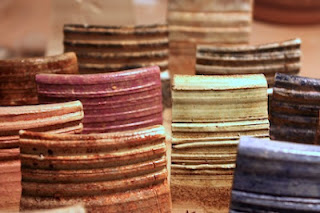 I had finished an electric firing at the end of the week. I put cones in the kiln to check the temp again since I have a kiln-sitter that I fire with. The top and bottom cones showed I am definitely not even throughout the kiln. The middle was closer to temp but all around, I am a cone off and things did not really fire properly. Meaning, I need to pop a cone 7 in the kiln-sitter to get a truer cone 6 but then I hear that's often the case with kiln-sitter mechanisms and even Orton's site mentioned this tidbit.

Still, my test tiles came out just fine. Two things, I am pleased with the sponging technique I'm using. A bit of an homage to Bybee Pottery, the historical pottery just up the road from me. They employed a sponging technique that is simple and recognizable and very collected. I'm using the sponging as a way to layer several different oxides, slips and glazes to achieve variated depths of color and texture. I've chosen a group that I like so you know what that means. More testing! As for the rest of the kiln that didn't quite get to temperature, it'll be a re-fire. But in the end, all this extra work should pay off and I'll have a color scheme in oxidation that I'm satisfied with complimentary to the carved pots I get from salt and wood firings.
Happy Rocktober, Everyone!
at 5:32 AM