I am working on some family genealogy. The story of my family background has been pretty static for decades, mostly because there were few people interested enough to do some digging (immediate family to me), and because, prior to the internet, it took longer to track down information. However, thanks to online search engines and databases, I have started to paint a picture of my family background prior to my parents. So far, I've tracked down my Cusick side to my great-grandfather George and his wife Mary. Boston Irish in origin, they moved to the NYC area sometime in 1870. I had found the 1870 census about a year ago and glanced at it, noting that they moved to New York but until the other night, I never really read the details. They lived on Willett Street in Manhattan in April 1870. At first, I thought it said Millett Street or Nillett Street, neither of which I could find on a map of Manhattan. When I located Willett Street in Manhattan, I realized that my relatives lived in the Lower East Side. Not just near the Lower East Side, THE Lower East Side. The "Give me your tired..." poor, immigrant, multi-ethnic, tenement housed, filthy, crammed, notorious Lower East Side. 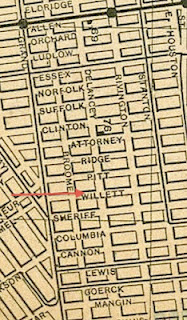 While most people think of Orchard Street when they think of the Lower East Side, Willett Street was also part of the mix. If you look above, Willett Street is one block away from Sheriff Street, which had a large German population for some time. The stories about the Germans there at the time focussed on their "occupation" as "rag pickers" starting in the 1850's. Here's a link to a description of this area then.
Delancy and the Williamsburg Bridge approach bisect this area now. This is what exists at Sheriff and Willett today.
Humble beginning, hard life, they eventually moved out of that situation to Westchester County, N.Y., so some things got better for them. George and Mary both passed away in Connecticut, around the Hartford area.
I'm also looking into the recent release of the 1940 census. The US Archives have released the images of the pages but they are not indexed by name yet. If you know where your relatives lived, you can look through the maps to determine the Enumeration District (the area sectioned off for counting) and then find the census pages for that ED. You have to slog through the images, lots of scrolling, but I have found my mother's side of the family when she was 12-years-old. My uncle Vincent was listed as an Assistant Instructor for a "private golf course." The census was taken prior to the US involvement to WWII so it's an interesting snapshot of things before the shit hit the fan. Scanning the names has made me nostalgic for the East Coast, living here in landlocked Kentucky. So many lyrical Italian names! So many names of people I went to school with; I must be looking at their grandparents, their parents as children, cousins, aunts, uncles. Really cool stuff. Take a look. It's addicting.
at 5:24 PM