Brown out of the ground 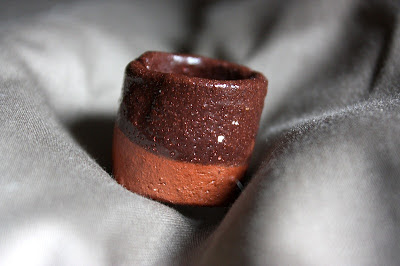 Dug from the pasture. I finally found some clay that will hold shape and vitrify to Cone 6 – so far. Recent storms and wash-outs have uncovered a small seam so I'm hoping to dig a larger quantity to play with. For now, I'm just testing. This is basically the same clay body as Bybee's clay body as it comes from the same geologic layer laid down during the Denovian extinction.  If all goes well, it should fire to cone 10 and a little bit higher. At higher temps, other tests with some of my local potter friends have yielded a deep, dark chocolate body color.
Most of the clay I have found along my stream beds has been the gray-blue variety which I've been using and testing as a slip. It won't hold a form but it fluxes on it's own as a slip/glaze. Bright orange at low fire (cone 010-cone 060, at least) but deepens it cone 6 and becomes shinier. This recent clay is yellow ochre in color. Happy that I found some. Now I have to get buckets and dig some up before the horses crap all over it.

In the mean time, I have some carving of mugs to execute while I wait on the second glaze firing in the past few days. Night times are being devoted to researching kiln building. I plan to construct a kiln on the property next to the studio and future gallery. I've settled on a soda/reduction kiln using LP gas and wood. I have found a hybrid plan and hope to modify it to my needs. I want the flexibility of using wood, which I have in abundance on my property, with gas or just gas firing alone. I'm intrigued by soda, mostly because I find myself gravitating towards pots that are soda-fired again and again. I think the effects might work well with the type of primitive carving and graphic shapes I use. The other reason, quite frankly, is that no one else close by utilizes soda-firing, (mostly salt-firing) so a good part of this is curiosity and experimentation. Worse comes to worse, I'll just fire reduction firings.
Slowly getting back to some regular production after the Great Gall Bladder Removal. Much to catch up on, the least of which is finally getting all the raised beds situated in the garden. My husband did most of the heavy work, the construction, the tilling and the filling of the beds. I tried to help but really shouldn't be doing so much just yet. Weeding and planting are my speed. It's late in the season, I had hoped to be so much further along but better late than never!
at 7:05 AM