What The Hell Happened To Cindi? Did She Disappear?

I'm baaaaack...
I looked at some logins the other day across a few social media platforms I belong to and on one of them I noticed I hadn't updated since 2016. At first I figured that was a typo but considering the events of the end of last year and the binging of this year, I realized, nope, that's accurate.
Let's catch up, shall we?
I'm still making pottery and have even managed to get some art pieces done. In fact, making all this work is a big part of the reason why I've been so lax in my online social media presence. Pots have been thrown, bisqued and even glaze-fired. Right now there's a back up in the studio because I'm waiting on some wood-firing schedules with the fine folks at Bobtown Arts in Berea so I can get some new wood-fired pieces finished. Additionally, I've been trying to keep the local galleries supplied as best as possible. Currently, I have a whole bunch of glazed ware ready for firing but I still need to push some greenware first to fill a bisque load in the kiln to complete the glaze load! Workable studio space is small so I don't have much room for inventory to sit and hang out. When I run out of space while things are in process, I have to get creative while I work, whole lotta shuffling of... stuff. That tends to stress me out. Anyway, you ask, how did I end up in a cycle where I'm a bit congested and behind the loop? 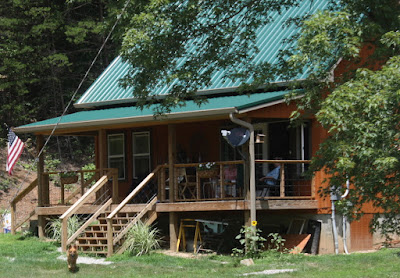 Well, Mother had some heart surgery. Now that Mother is living in a nice cabin on the property directly behind my studio (with a lovely view of the farm scenery, I might add), I split my time working and checking up on her. Last year the extent of her health issues were critical and had to be addressed ASAP. In late January, she went in for what's referred to as a TAVR procedure to replace her aortic valve for severe aortic stenosis. It happens under general anesthesia via an incision in your femoral artery. The valve worked beautifully. However, she had some bleeding, not major but enough that she spent about a week in ICU then onto Telemetry for another few weeks then a couple of weeks in the local nursing home rehab. The whole episode until I started to get into a routine with her care and my work has lasted until about May-June. She's doing great. We can't thank the surgeons, cardiologists and whole medical team enough.

Of course, me being me, beyond trying to keep my pottery and business moving forward, (even if it's only inches at a time), my brain gets sapped dealing with multiple crises at once. In case you haven't discovered this yourself, multi-tasking is bullshit. A sapped brain coupled with the current existential political reality in the USA exacerbated the usual seasonal depression in the winter months that I encounter so recovering out of that has taken its toll, sending me into a sticky depressive state for longer than I'm used to. I'm not a pill person when dealing with my depressive moments. I prefer a diet/therapy/exercise/meditative approach. It's much slower to come out of but it works for me. So I'm slowly getting things back on track. YAY FOR ME!

I still have work stocked at the Berea Arts Council in Berea, KY, DamselFly Gallery in Midway, KY and Silo Mill Gift Shop in Irvine, KY. If you're in the area, go see those peeps! 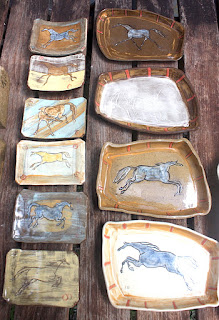 Starting at the beginning of this year, I was lucky to get some clay samples from my local supplier, Kentucky Mudworks. They've expanded to a location in Louisville and there they have embarked on producing their own line of moist clays, right now, mid-range and high fire clays. I've messed around with the mid-range clays with test tiles, thrown and hand-built items, carved, slips, underglazes, various glaze combinations. Some of the results are promising and I'll be putting up a write-up of my results shortly. The high fire tests will be fired off-site at Bobtown Arts and perhaps another soda kiln in Lawrenceburg, KY. One day, (maybe next year?) I'll get my own wood-fired soda kiln built on-site but until then, I'm limited to the mid-range electric fired clays.

ETSY!! Guess who has new listings? Yup and some of them are even the new clays! Peruse the page and pick yer faves.

Believe it or not, I had Open Studio hours this summer but as I have done ZERO publicizing, the studio was rather subdued. Open visits are back for the month of September, Tuesdays and Wednesdays, 10-4pm. Hopefully, I'll adjust the FB page notice accordingly. Due to all the Mother-related activities, I have missed my goals to apply to some outdoor shows so if you want to see me, come out in September or... 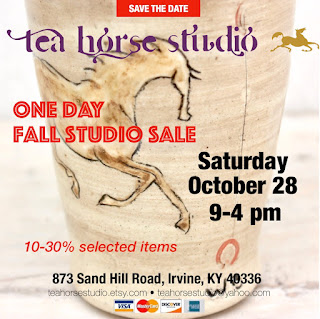 Yup. One day ONLY.
Saturday, October 28 from 9-5 pm
10% off all items, some selected items up to 30% off.
Get the jump on Christmas, help me reduce my local inventory.
Mark those calendars.