It's all well and good to update what's going on around these parts and how work is progressing but sometimes it's more interesting to me and more fun to look at other people's work and some significant influences in the world around me. First up on the agenda is my fellow ceramic artist, Lori Phillips.

Lori Phillips is a warm, quirky, inquisitive, loving, talented and inspirational artist based in the Richmond, KY area. She also graduated from EKU with me from the Ceramics BFA program under Joe Molinaro, a semester ahead of me. We share a similar sensibility and source of inspiration from the world around us and you can see how our work feeds off of, and influences us. She has a beautiful feel for color and is adventurous with it and with the many textures she uses in her functional work and her sculptural work. 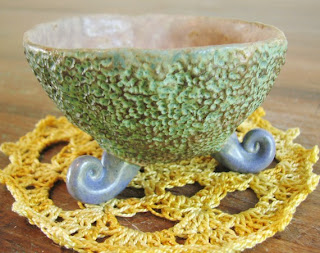 She and I collaborated on a group show we put together at the Irvinton House Museum in 2010 called Adaptation which I'll post about at a later date.

Lori has her own blog and her own Esty shop and I say to you: GO THERE NOW!

Being a little obsessed about creating things means that when I'm not contemplating, "Why menopause?" and producing something to comment on my musings, I'm making functional things and fun stuff to wear, to use, to send, to hang. To that end, I've separated the functional side of my elf-like work from the reflective, fine art work. I'll be making that kind of functional, craft-ish-ness-like work under the Tea Horse Studio name and the fine art work will be signed by me, Cynthia Cusick.


The place to find and buy my work will be on my new Etsy site, Tea Horse Studio. I picked the name as a play on several things that relate to me. "Tea Horse" is derived from "Wind Horse" which is an allegory for the human soul in Tibetan Buddhism and Buddhism is a philosophy that resonates with me. I also and an avid tea drinker and my first horse, my childhood dream, my four-legged soulmate is my Arabian gelding, Three Wishes, better know around the farm as Tee. The first batch of things on the site are a few heart badges just in time for Valentine's Day.


I have some ceramic, wood-fired cups to photograph and list in a few days plus I'll be rolling out more badges with other images like abstracts, animals, people, crotches and suggestive naughty bits. I can't help myself.

In the future. I'll also be posting about some buddies of mine from back in the day who are also making things and listing on Etsy. We're all a creative bunch.
at 6:49 AM No comments: 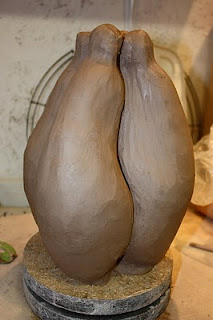 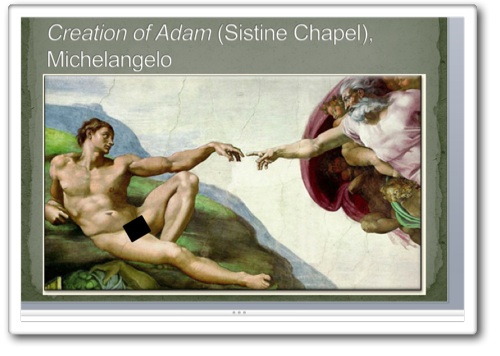 My stepson is a junior at a private, regional, Catholic school. They're studying British literature this year and this coming semester they're moving from The Canterbury Tales and such to Renaissance and Victorian era literature. To introduce the Renaissance period, his teacher prepared a powerpoint presentation that goes over the kinds of changes Europe saw during the Renaissance, in literature and in art. So I go and check out what they're teaching the kids these days and, being an artist, I'm interested in the art bits. I love me some Renaissance art! Well, fuck me, if she didn't actually put back blocks over the genitalia of not one, but two of the pieces of art she chose to illustrate Renaissance art, Michaelangelo's Creation panel in the Sistine Chapel and Titian's Venus of Urbino. 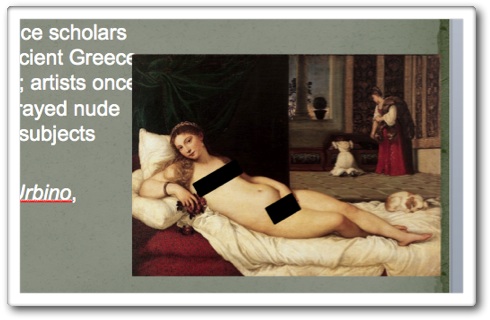 These are the actual screen shots. After I burst out laughing, I realized I was mostly speechless. Is she kidding? This is 2011, we are in the 21st century, are we not? And she's censoring fine art, not just fine art but classic fine art. To what end? Why? Because she's teaching 17-year-olds in a Catholic school? How could a Catholic school find this offensive?? The original Creation panel resides in Rome. In the Sistine Chapel. In the Vatican. Where the fucking Pope lives. Between this and the recent "censoring" of Mark Twain's Huckleberry Finn, could we all grow up a little? I mean, really.
at 4:58 PM 1 comment:

Oh, some days are worse than others. But at least I know I'm not crazy. Working on a few things in the studio at the moment, about four gourd pieces and I've started on the old reliable pinch pots to get me back into clay. The thing I like about having a few projects going at once is that it compliments, nicely, the short attention span mode I can get into from time to time. Plus, when I hit a road block in solving a problem, it keeps me from fucking things up on a piece out of frustration. I have a collection of work over the years (non-clay) that is really nothing more that an "I'll get back to that" group although in some cases, it's been years. I suppose I hope I'll just grow to like something if I live with it long enough. Either  that or I'll finally get the urge to chuck it or recycle it.
So today's symptoms on the Shrine are muscle tension, which the yoga should help with, joint pain (why? why not, my body says), itchy crawly skin, lack of libido (a frequent visitor), and body odor changes. I think I'll dress in a sack today.
at 6:57 AM No comments: