As a person with no biological children, I often ponder questions about femininity, motherhood and the nature of being a woman as it relates to my identity. My quandaries are not new. These are issues that have faced women – and men – since we ascertained the differences between the sexes, I am sure. When I was in my twenties and early thirties, I had firmly associated myself with not being a child-bearing woman of my own choice, and thus I identified myself as "not the mothering type" based on the fact that not only did I not have children, I did not want them. I worked as a graphic designer and production artist at a small firm on 19th Street in Manhattan with a small group of people. One day a comment about taking care of people was made and I threw out in to the conversation that I "was not the mothering type." My co-worker turned, shocked, and said to me, "You?! You're the most mothering person I know!" My definition of "mother" turned a corner that day and I've been pondering it ever since.

I finally got my head around the fact that I had learned to "be mothering," to look out for another's welfare, to care for another. Even though I had not gone through the experience of giving birth to my own child and didn't feel any inclination to want to do that, I still possessed those valued qualities associated with "being a mother." So where did that put me – or anyone else – in terms of self-identity and "mother?" I'm not talking about the side subject of "The Cult of Motherhood" in modern US culture, but rather what does it mean to be a mother? What do we mean, really? And what are we really valuing? Yes, I did "take care" of others, people, animals, my environment. And, most of the time, I enjoyed it. Sometimes, though, it was a burden, pressure, an obligation with no release. I began to think of my own mother differently, what she did, how she behaved and why.

There is a satisfaction to contributing to the benefit and welfare of others. When you can give freely, it can bring a sense of accomplishment. But, I have to admit, there have been times when I've felt overwhelmed and misused. I wonder who is there to take care of me? When do I get a break? Again, a sentiment that has been around as long as awareness, I'm sure. 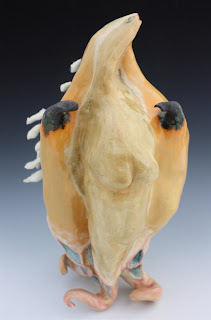 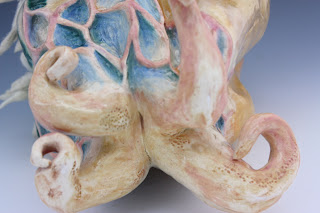 I went out into the garden last year and found this green caterpillar on my tomatoes. Ignorant at the time, it was a bad thing, a hornworm that eats the tomatoes and I should have eradicated it. Nature took care of it for me. Within the next few days, I found one on the tomatoes but covered in dangling little white pods. How unusual! I took photos. I had no idea what they were. Turns out... they were the pupae of a parasitic wasp that uses the hornworm as a host. The hornworm would die, albeit, slowly. These cute little white pods, like jewelry or a little oval pompom coat, were simply feeding off the host until they sucked it dry. Nature doesn't care. Really. It just does it's thing. We observe.

When I'm having a bad day trying to take care of myself and my interests, when the day is running long and I'm behind and my husband asks, What's for dinner?" innocently instead of making it himself – for the both of us – and the animals start hovering around me waiting to be fed, crying, meowing, whinnying, whining, screaming, "Where's my food???" I think of the draining, cumbersome feeling of mothering and I think of that hornworm.