My farm, where my studio is located, is home to my family of animals. I started out with the four cats, Stalin, Kool Mo Dee, Ariel and Murray and now only Murray, the cat with eyebrows, is left out of the original Gang of Four. Over the years I've lived here, besides the husband and stepson, I've added several cats, some who made it (Possum, Nietzsche, Izzy], some who met an early demise [R.I.P Chief], four to five dogs and two horses, including Three Wishes aka Tee, Tee Bear and Mr. Tee. My first dog was Diva. I got her as a puppy. I would say I picked her out but she picked me out. Followed me around the barn even though I had my eye on another puppy. She's been a wonderful dog for about 11 years so far. She's tolerated Sport and puts up with Maxx, attempting to play with him until she can't deal with him anymore and she whips his butt into submission, even with her hip dysplasia. 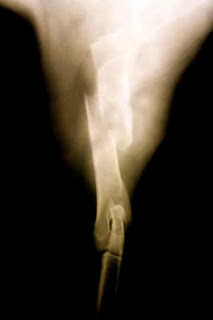 Diva, it seems, got hit by a car yesterday, and suffered a bad break in her front, left, upper femur. I had three options, amputation, surgery or euthanasia. Amputation was out of the question since she has hip dysplasia and uses her front end as her primary muscle group. Her back end kinda hippity-hops along like a rudder when she moves. And as bad as the break is, I just wasn't ready to say good-bye to her this way at this moment. The surgery is about $1,000 to put in a rod and plate and screws. Ouch, double-ouch and pass the ammonia. Time to make more pots and gourd badges.
I found her lying on the front lawn last night while it was still light.  When I came out, she attempted to get up, very slowly. "You old dog," I called out to her. But as she turned around, her left leg was hanging low, paw curled, bearing no weight. Good lord, I thought, what has she done now? I thought it was her paw or lower leg so I bandaged it until I could get her to a vet but as I was letting the paw down across her chest, she yelped and that's when I realized it was her shoulder, or what I thought was her shoulder. I thought, maybe, she had dislocated it while playing with Maxx. She had no other marks on her, no scratches, no cuts, no road rash.
I brought her to a vet in Richmond this morning, to get x-rays. My biggest worry: how to get her into the car? She's not a little dog, about 65-70 lbs., and I knew moving her could cause her so much more pain. When I went out of the house in the morning, she was in her dog house, waiting for me. I looked at her and said, "Diva, honey, we gotta figure out how to get you into the car today. You hang here while I make some calls." I know it sounds weird but I truly believe when you bond with an animal, in times of stress and pain, they know and you know. You both understand what has to be done and you help each other out. I think that's why service animals work well when a good match is made. Anyway, I went back into the house and spoke to the vet who said, "Find a way to get her into the car and then call us when you're on the way." So it was up to me, one way or another, to get her into the car. I walked out the back to her doghouse and she was gone. Huh? I went around to the front porch and there she was, on the porch, on the cushion on the porch, laying on her bad side. She had dragged herself around the house and up the two steps to the porch. She must have been in tremendous pain. I looked at the porch height. I looked at the bumper height of the hatchback of my Subaru. Same height. I backed the car up, over the lawn with the hatch up and lightly touched the bumper to the porch. Level. I dragged the cushion with Diva on it over to the car and I'll be damned if she didn't lay perfectly still until we got to the back of the car where she hoisted herself up until I could lift her across the threshold and into the back. She laid down, panting from the pain. It was as if she understood the dilemma we we're in so she said, "I'll get on the porch and meet you halfway."
Some friends and family say they would have put her down, including my husband, but Diva is my first dog, ever. Growing up in an apartment in lower Westchester County, it was cats, fish or birds - no dogs. She is my special girl. Maybe if I had had dogs all my life I'd have opted to let her go but I still don't think so. Not after she showed such understanding and courage. I owed her that. I'm not happy about the expense and perhaps if she had been in worse shape, bleeding, in shock, multiple fractures, I would have made another decision but that wasn't the case. Surgery is tomorrow, assuming all goes well, she comes home Wednesday, gimpier than before but still my Diva.
I've added new gourd badges to the Etsy site. I'm making more. I'm attending a salt firing this week; making more cups and pots. I've got a fire lit under my ass to take care of the family I love, including the furry ones. I can't move fast enough.
at 7:43 PM